We climb up to the highest part of the village in search of the cemetery along the GR trail. When we arrive at an intersection, we must leave the GR that ascends towards Monsagre and instead continue towards the Coll de la Gilaberta, first via a path that goes past the Font del Morella, and then once that finishes, along a trail that rises sharply up to the Coll de la Gilaberta.

In order to avoid the Pas de la Barca crossing, which frequently carries water, follow the signs indicating ‘paso alternativo’ [alternative route]. Descend down to the bottom of the riverbed and then climb up along the terraces on the opposite bank, moving along to the level terrace before descending. Before long we will arrive at the Barranc de Piquer a gully which normally carries water, below the Roques de Benet. Some 200 m ahead, after going along a paved path, we will see a flat trail that splits off to our left. If we take this way, in about 30 m we arrive at a spring with a drinking trough. By keeping on track we climb up in search of the Coll de la Terra, from where we then descend until we meet the tarmac path which comes from Horta and takes us to Franqueta.

We follow this route keeping to the left, rising up to the Coll de Blanco and then the Coll de la Valera. At this point, before the path begins to descend, we will see to our right an indicator that forces us to take a trail to the area of Lliberós and Els Estrets and in turn cuts out a good part of the tarmac path.

Once there you will be able to take a well-deserved dip in the lake of your choosing. On leaving Els Estrets and before reaching the paved path that ascends to a trail, we shall continue along a path that runs parallel to the river, marked as PR. This path leads to a dirt track that, after crossing the river via a concrete ford, meets another tarmac path. By keeping to the left we arrive in Arnes. 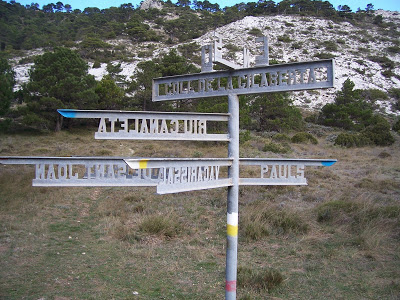 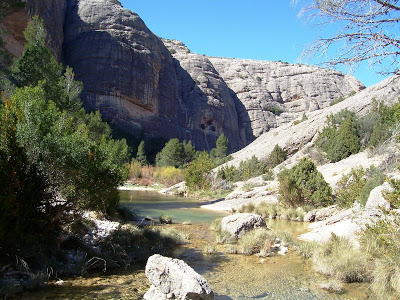