We start our trip in the south of Catalonia, at the Refugi Mont-Caro, also called “Pepito Anguera” (1,090 m), in the middle of the Els Ports Natural Park, the meeting point with the GR 7. We leave the refuge trail and go to the left following a stretch of the Mascar road.

We then continue along a tarmac trail through the middle of some villas, before arriving at the Font de les Bassiets (960 m), on the right of the path. A steep descent then takes us to the Barranc de la Higuera, which we cross. Once on the other side, the trail starts to go up towards El Portell. We are now in the Vall de la Figuera. Once past El Portell (800 m), the GR begins a sharp descent in a northeast direction, going through a network of paths and houses on both sides, until arriving at Santa Magdalena del Toscar (500 m), where we find the chapel and the Toscar springs. The Santa Magdalena chapel is situated upstream from the castle, to the left of the ravine. It was built in the modern era with rectangular door frames and two cypress trees outside. Upstream from Santa Magdalena is La Cova Pintada [The Painted Cave] with remnants of cave paintings and engravings.

Before long, we cross a ravine by a bridge and arrive at a tarmac path. On the left, a path heads off towards Les Clotes, next to an electrical transformer unit. Immediately, we arrive at an intersection in the trails and pass below the El Toscano hostal. Leaving the Sant Julià chapel and the Fonts del Bosc Negre springs on the left of the path, the GR turns to the right and passes beneath the Castell de Carles, of which many walls still remain intact. We pass some plains towards the foot of the castle and we then arrive at a new ravine, which we cross. We continue along the path of the Santa Lucía chapel, passing in front of the Alfara de Carles fish farm.

After completing a short stretch of the cemented Toscar path, we arrive at the TV-3422 road, which we follow for a few minutes until we get to the village of Alfara de Carles (335 m), which is situated to the right of the GR 171. The terrain in this village of the Low Ebro District is particularly rugged due to the spurs of the Els Ports Tortosa-Beseit chain of mountains. The village of Alfara is situated on the top of a hill to the left of the Barranc del Llop. The settlement of Carles is documented as far back as the year 1148. In the 15th century, due to an epidemic, the town was deserted by survivors who left for Alfara.

We leave Alfara de Carles and pass along the side of the cemetery, situated on the left side of the trail. Further ahead, we pass a farm on the right and the Mas de María farmhouse. The trail starts to climb and after about 20 minutes we arrive at Coll de Alfara-Paüls (780 m), where we find a signpost. From here there is a beautiful panorama of the Delta del Ebro and the Els Ports massif. The trail then descends down from the Coll along the old Paüls path until meeting a trail that intersects (signpost), where the PR C-185 leads in the direction of Arnes.

The GR 171 continues in a northerly direction towards Paüls. We pass a hut on the right of the trail and then cross the Barranc de les Valls ravine. Shortly after, we meet a signpost indicating a convergence with the GR 7 once again. Both GR routes follow the same path for a while along what is known as the Sant Roc path. When it meets a crossroads, the GR 7 heads to the right towards Andorra, whilst the GR 171 continues straight ahead on the tarmac Sant Roc path until it enters the village of Paüls (350 m). Situated on a hill crowned with the ruins of an ancient castle, the village was a victim of wars from both modern and contemporary eras. In 1836, the village was burned and looted by the liberals. The staggered levels of the village give the streets of the village a curious and interesting appearance. End of Stage 1 of the GR 171. 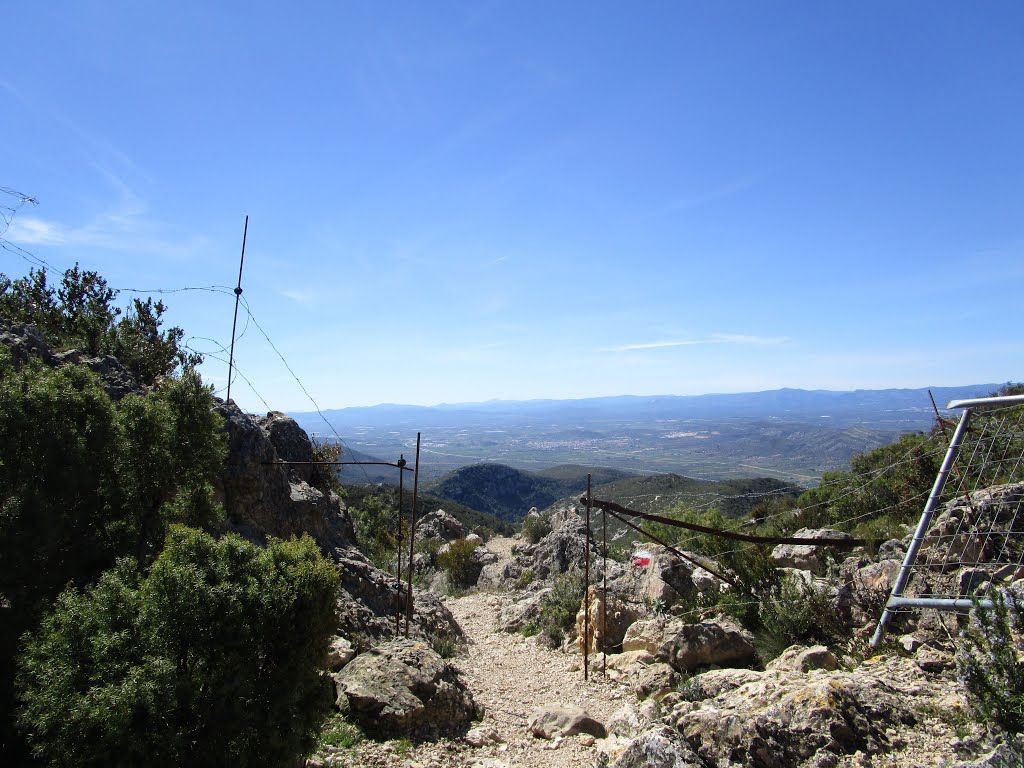