Total Catalan Section: 49 km.
Terra Alta Section: 26 km. Baix Ebre Section: 23 Km.
Location: Old station of Arnes-Lledó; Tortosa
Municipalities: the route arrives by Aragon and crosses through the municipal area of Arnes, Horta de Sant Joan, Bot, Prat de Comte, Pinell de Brai, crosses through municipal of Benifallet, Xerta, Aldover, Jesús, Roquetes and Tortosa.
Slope: 400 m.
Difficulty: Low.
Users: On foot, on horseback or by bicycle.
Accessibility: There is an accessible stretch of 5 km between the Bot station to the Sanctuary of Fontcalda.
Recommendations: water bottle, replacement chamber for the bike, light, insect repellent and waste bag.
Firm type: Asphalt layer.
Infrastructure: It crosses tunnels excavated to the rock with and without illumination, aqueducts, old railway stations, leisure areas and bridges.
Stations with restaurant and bar service: Aldover and Benifallet. In Bot there is a train wagon enabled as a bar service.
Drinking water points: Jesus, Aldover, Xerta, Bot and Fontcalda.
Emergency telephones: 085 firefighters, emergency 112, ambulances 061 and health responds 902111444. The points covered by the Terra Alta section are signposted.
Connection with another bicycle route: From here you connect to the Natural Way of Tortosa-l'Aldea-Deltebre to reach the mouth of the Delta de l'Ebre.

What is the greenway (Via Verda)?

The Greenway is a tourist route restricted to itineraries that run on old railway infrastructures. In this case it passes through the old railway line of the Val de Zafan. The Greenway is the ideal instrument to promote a new culture of leisure, outdoor sports and non-motorized mobility among society. In addition, it represents a help to the culture of bicycles, hiking, horseback riding, it generalizes its use among all citizens, playing an important educational role, especially for younger people, since the great advantage of the Greenway is that it guarantees the accessibility and universality of the users, without age limitations or physical capacity.

The Greenway is a tourist route, of non-motorized access, which passes through the old railway line of the Val de Zafan.

Given the interest of the government of Aragon to have a seaport to exploit their products, in 1863 the route was projected to unite Puebla de Híjar (Aragon) with Sant Carles de la Ràpita (Catalonia).
The works began in 1882. The first stretch between La Puebla de Híjar and Alcanyís was opened in 1895 and the extension until Tortosa was not reached until 1942. The line of the Val de Zafan played an important role logistics during the Battle of the Ebre.
The sinking of a tunnel in 1971 between the stations of Pinell de Brai and Prat de Comte served as an excuse for its final closure in September 1973.

If we begin the route to Arnes, http://www.arnes.altanet.org/ located in its main square we will be able to admire a privileged panoramic view of the Ports. The historic center of this town was declared of cultural interest by the Generalitat de Catalunya and its Town Hall is one of the first in Renaissance style.

In order to find the Greenway , we will have to leave the town on the road that leads to the junction of the T-330 road (Gandesa - Vall-de-Roures) with the entrance to the town, following the signs that we will take about 5 km approximately to the limits of Catalonia with Aragon, next to the Algars River, place where there is a small area ideal for taking a bath. From there, you can contemplate the imposing concrete bridge that saves the natural obstacle of the river, and where adventure sports such as bungee jumping can be practiced. Right next to us, we find the Arnes-Lledó station, starting point of the Terra Alta Greenway.

We start the path along the Greenway towards Horta de Sant Joan http://www.hortadesantjoan.cat/ . Only two kilometers separate the station from the town. In the town we can visit the Ecomuseu dels Ports http://www.elsports.cat/ and the Picasso Center http://centrepicasso.cat/, being one of the obligatory visits to the medieval town center with the square of the church, the town hall and the church of Sant Joan Baptista.

In front of Horta de Sant Joan station we find the path that will take us to the Convent of Sant Salvador and to the natural space called "Racó de les Olles", a place of great beauty and an ideal place to take a bath at the waters of the Canaleta river.

From Horta, the itinerary begins to descend very gently. Several tunnels and aqueducts are part of this route until you reach the Bot station, in the middle of the route and next to the town. The most significant building in Bot http://www.bot.altanet.org/ is the Renaissance church of Sant Blai located in the middle of the town. You can also visit the hermitage of Sant Josep, from where you can see a fantastic view of Bot, the Pàndols i Cavalls Mountain ranges and the Greenway . At the edge of the hermitage there is the recreational area of the Hole of the Maid.

While doing the route, after Bot we arrive at the Prat de Comte station. Prat de Comte http://www.pratdecomte.altanet.org/ , 4 km away from the Greenway, it is a small town populated at the time of the Templars, where the church of Sant Bartomeu stands out, the Portal (former door of entrance to the town), the distillery and the bread oven.

1 km from the Prat de Comte station, and on the edge of the route, we find the Fontcalda Sanctuary: a landscaped , thermal and religious complex, a place where you must stop by those that go along the Greenway. Located in the middle of a valley, next to the Canaleta River, it is named after the hot water source that flows at the foot of the 14th century sanctuary. A pathway allows you to follow the narrowing formed by the river over time. Its clean, transparent waters invite you to bathe and enjoy it with this gift of nature.

The end of the Greenway of Terra Alta is at the station of Pinell de Brai, 5 km from Fontcalda. The population of the Pinell de Brai http://www.pinelldebrai.altanet.org/ we will find it 6 km from the Greenway, where nobody can stop visiting the Modernist cooperative winery by César Martinell, disciple of Gaudí. The cooperative is the greatest exponent of the cooperatives built by this disciple at Gaudí. The Modernist style is appreciated by the four corners. It is imperative to contemplate the magnificent glazed ceramic frieze on the facade of the cellar, the work of Xavier Nogués, where allegorical scenes are represented in the vineyard.

Leaving the old Pinell de Brai station we cross several tunnels illuminated until reaching the majestic Pont de la Riberola, construction in the middle of the ravine that receives the same name through which it crosses the Canaletes River that ends at the Ebro few miles from the site.

This route shares an itinerary along the Camí de Sant Jaume de l'Ebre and the GR-99 or the water trail. We cross the first of the 19 tunnels that will accompany us during the journey. We reached the municipal district of Benifallet http://www.benifallet.altanet.org where we find the Old Benifallet Station http: //www-estaciodebenifallet.com converted into catering, accommodation and bicycle rental service.

We continue along the route between the mountains along the river Ebro, on our left, until we arrive at the Assut, located in the middle of the Ebro. Arab engineering work from where the two channels leave for irrigation with fresh water from the vegetable garden and rice fields of the Ebro Delta.

We follow the route and cross the village of Xerta http://xerta.altanet.org, where we can see the exterior of the stately houses and the limnigraph, a fluviometric scale located on the wall of the church in the Plaza Mayor. We follow the path through the fields of cultivation of the orchard with fruit trees and orchards following in a straight line along the channel and the Ebro until reaching the municipality of Aldover http://www.aldover.cat, where we cross the village and we find the Old Aldover Station,http://estacioaldover.wixsite.com/estacioaldover turned into restoration service. A few kilometers further down, we reach the leisure area of Terrer Roig de Jesús http://www.emdjesus.cat.We climb a small coast to continue flat until crossing the bridge of the Valley, along the cycle path towards Roquetes. We cross the pedestrian crossing the TV-3422 to enter the municipality of Roquetes. We find the headquarters of the Natural Park of the Ports http://www.parcsnaturals.gencat.cat/ca/ports, where it is recommended to visit the permanent exhibition of the geological formation of the Massif in the Natural Park of the Ports. We share a route with the urban bus lane until you reach the vestige of the old Zafan Valley Bridge. To the right, we find the building of the Observatori de l'Ebre, http://www.obsebre.url.edu/ca/ founded in 1904 by the Jesuits where Sol-Terra phenomena are studied. Already leaving the town we headed towards Tortosa http://www.tortosaturisme.cat/ca/.We cross with caution for the pedestrian crossing of the TV-3421 and we already see the city of Tortosa in the background. Cross the river Ebro through the old bridge of the red-colored railway, converted into a bicycle and pedestrian crossing that invites us to reach the end of the journey and visit the city, where we can highlight the old town declared as historic and artistic in 1976 with the cathedral of Santa Maria, the castle of La Suda, currently the National Tourism Hall and the Gothic, modernist and Jewish helmets, among others.

For the more adventurous from this point, at the feet of the red bridge, you can follow the urban cycle lane that joins the natural road of Tortosa-l'Aldea-Deltebre, (50 km) shared section with vehicles, and arrive until The mouth of the Ebre in the Natural Park of the Ebre Delta
http://parcsnaturals.gencat.cat/ca/delta-ebre.

We add wikiloc of the Greenway:
https://es.wikiloc.com/rutas-cicloturismo/via-verda-val-de-zafan-cami-na... 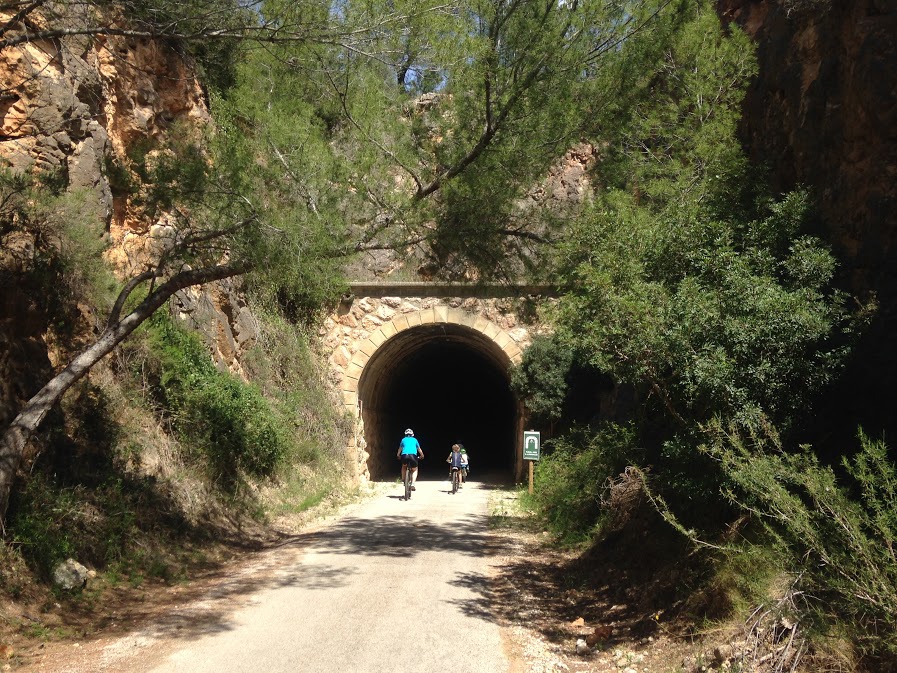 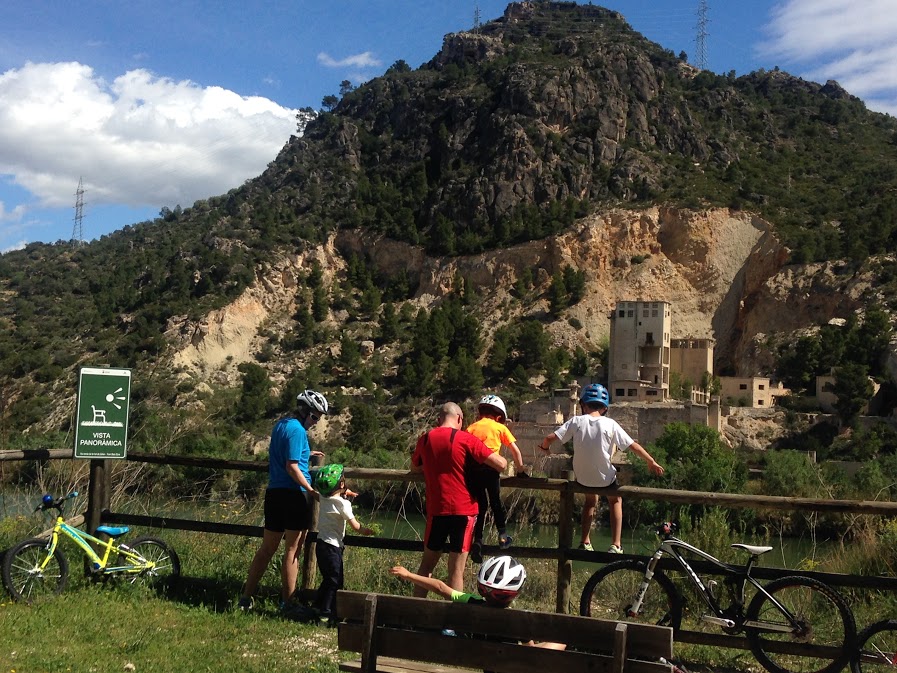 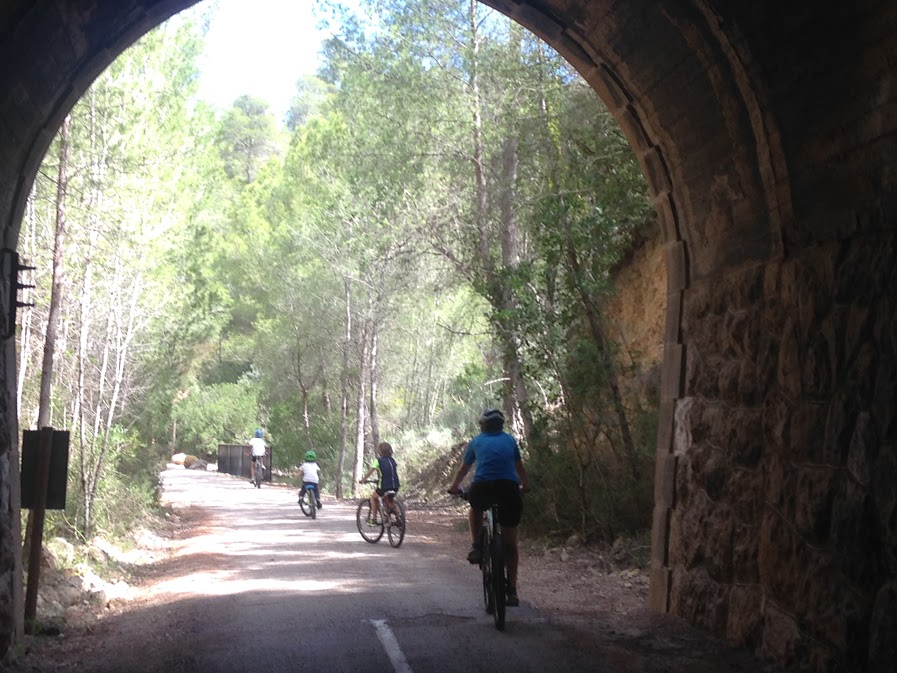 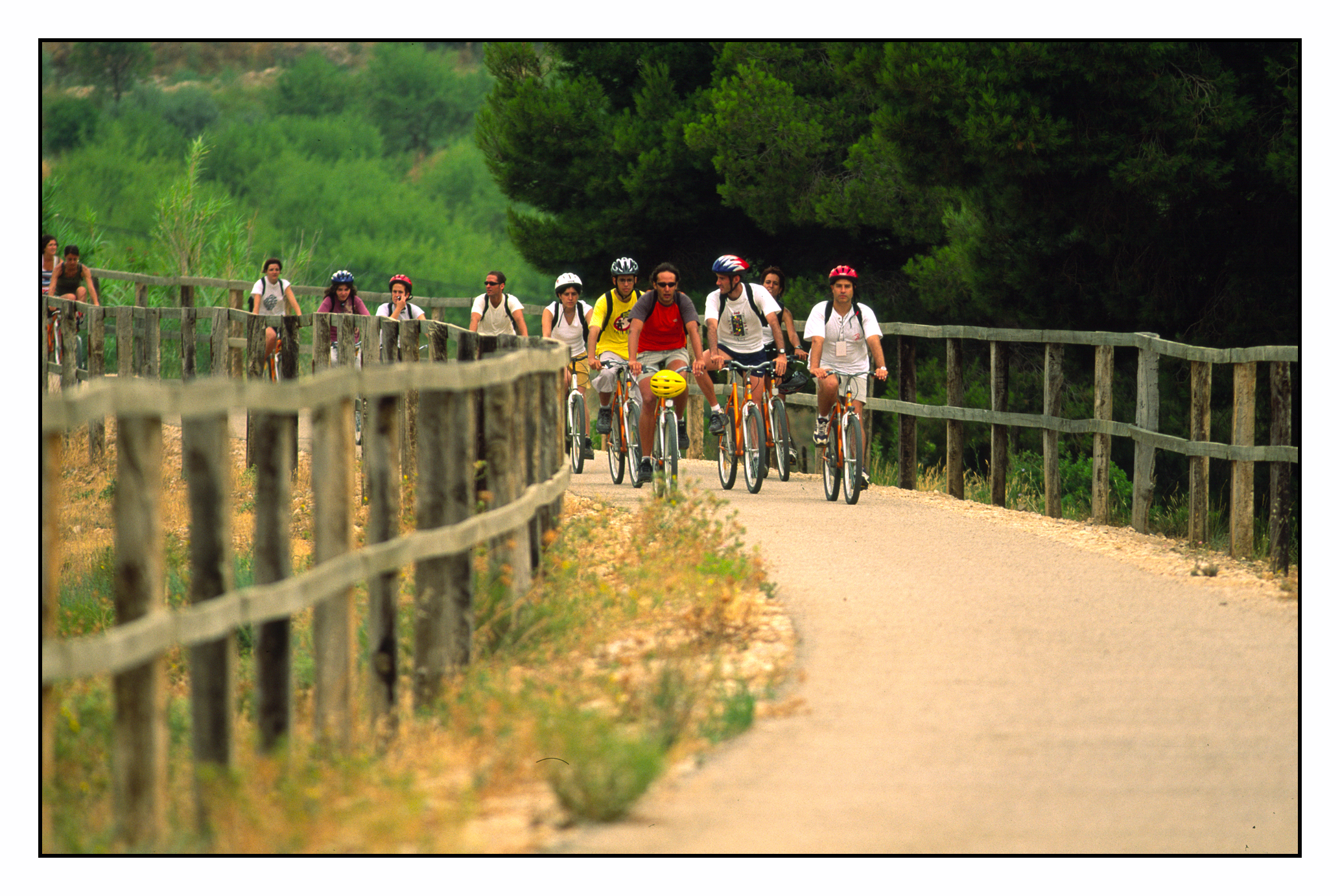 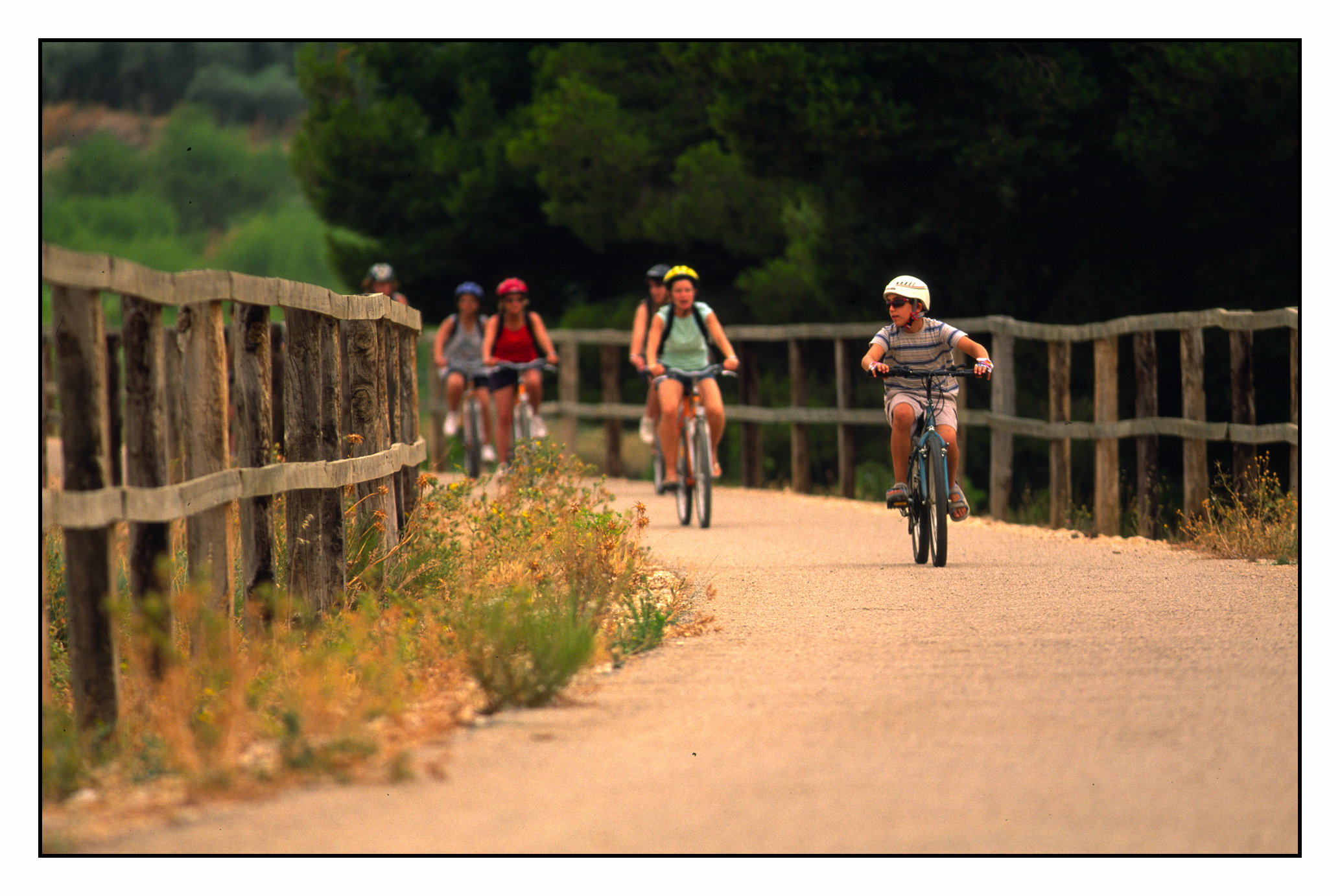 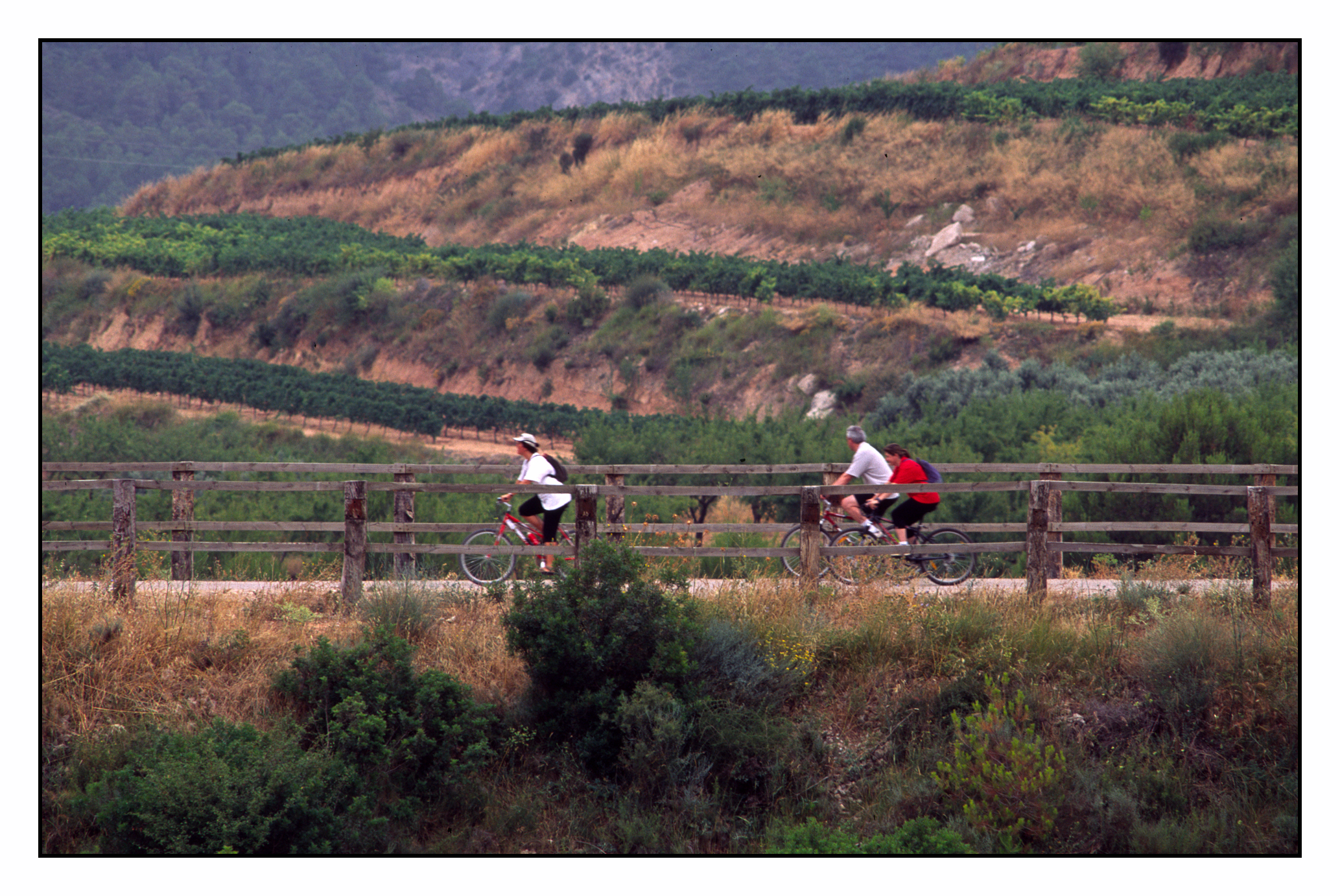