La Barcina is situated between the highest peaks of the Els Ports Natural Park, with a height of 1,354 m. To the northeast of Mont Caro (the highest part of the massif with an altitude of 1,447 m) La Barcina has the advantage of a not having such a steep and vertical relief. In contrast, at its peak it constitutes a flat limestone mass that allows one to move with ease on what is a pleasant walk with an incomparable panorama. Amateur botanists will particularly enjoy it as various endemic plant species and some of extraordinary rarity are also to be found in this area. On the way to the route’s finish point, don’t pass up the opportunity of visiting the Els Ports Natural Park Information Centre, the central headquarters in Roquetes from where this magnificent natural park is managed. Signposted route. To arrive at the route’s start point (situated on the road that goes up to Mont Caro) from Tortosa, take the T-341 road to Roquetes, from where one must continue for around 20 km in the direction Els Ports massif and Mont Caro - first along the T-342 road and then, after 3.5 km, going straight up the El Ports road (leaving the T-342, which goes towards los Reguers). Once at the top, the Caro refuge is found on a hill to the right with bar and restaurant services. However, the departure point of the route is situated at km 1.8 of the tarmac path that goes up to Mont Caro on the left, on the curve to the right just before the Coll del Vicari. There is very little space to park vehicles here so try to do it either on the previous curve, or if not, here on this hill. It is due to this, that the option to start walking from below the hill also exists (in this case, an additional 3.5 km is added on to the total journey length there and back). 0.00 km (1,265 m). The route then begins on this curve in the tarmac path that rises up to Mont Caro. Immediately, one passes a small rocky slope whilst climbing up along a trail to the right in a southeast direction, leaving behind another path that enters into the forest on the left. 0.60 km (1,307 m), 0 h 10 min. Having gone along the edge of La Muela del Boix before leaving it to our right, we then arrive at a small crest, from where you can make out the whole of the Ebro Delta. Continue to the east along the right side of the limestone rocks that a line along the crest. Once past these rocks, we go down a few metres and then continue along the right. With the help of milestones, we find our right path towards the left this time whilst changing sides on the small crest. We continue until the trail joins another that arrives on a flat route from the left. 1.30 km (1,312 m), 0 h 22 min. The trail turns right (SE) gliding along and leaving behind a path that goes down to the left. A few metres ahead, ascending gently towards the east with the help of some painted markers, we find the best path for crossing the rocky promontory. Keep turning slightly to the left without meeting the crest line which soon widens and with the help of the markers, we advance by branching off to the right slightly and climbing up another limestone block. 1.59 km (1,354 m), 0 h 30 min. At the summit of La Barcina, an east-facing point with spectacular panoramas, one can follow the trajectory of the Ebro river all the way up to its estuary. The Ebro Delta can be seen clearly, along with the villages that surround it, such as Deltebre, Sant Jaume d’Enveja, Amposta, Vinallop, Tortosa, Roquetes, Bitem, Tivenys, Xerta, as well as other villages on the plains between the Els Ports massif and the Montsià mountain range. By turning anti-clockwise, you will be able to contemplate the Els Ports relief, making out its most significant points, such as Les Rases del Maraco, Les Foies, El Pla de Terranyes, La Mola de Catí and, in the southeast, Mont Caro. To return to the beginning of the route, we must retrace our route. On the way back, if one follows the path that is most marked, the gradient will not change and we can instead continue straight ahead without climbing the crest since we meet both paths again later. This way, we then go through a magnificent forest. 3.18 km (1,265 km), 1 h. The curve in the tarmac path that goes up to Mont Caro before the Coll del Vicari. End of the route. Source: http://es.wikiloc.com/geotourism/catalunya-palau-robert/ruta-ascensio-a-... [Retrieved: 05/10/2015] 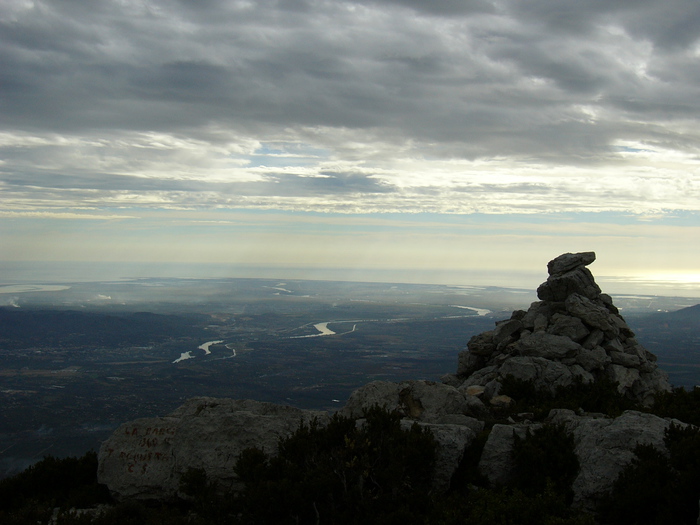 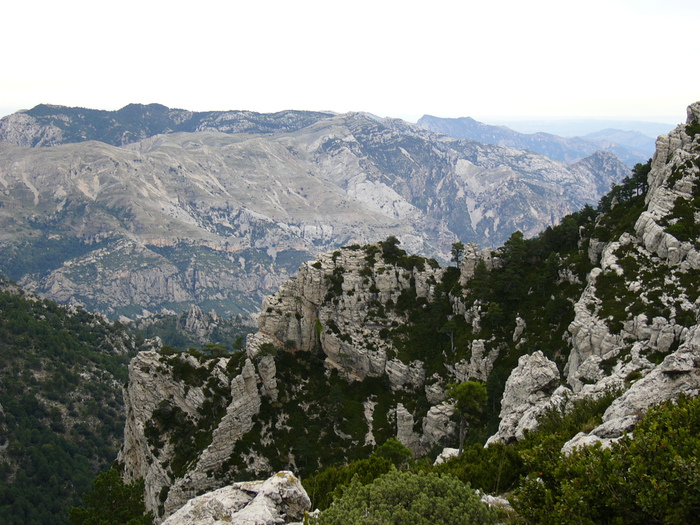