Due to the private properties in the area and the hunting season, this itinerary has two variants that can be used depending on the time of year. From March to September.

We start the route at the Sant Carles de la Ràpita exhibition centre (km 0). With the exhibition centre to our right, we keep going until arriving at the intersection of the road that links together Ràpita and Poblenou del Delta (km 0.5). We continue with great caution along the road for 400 m until seeing a dirt track and the sign indicating our route on the left. We turn left carefully, abandoning the road and continuing straight along a dirt track. After 200 m, we cross the Acequia de Mar dike (km 1.1) and head left along a dirt track that at first has an irrigation canal running along its left side. Whilst we pedal, we can observe three typical riverside buildings to our right. After 900 m, the path forces us to the right (km 2). We then turn right and continue straight ahead. We will see rice fields on both sides for 1.1 km. After, to our left we will see a line of different poplar trees, and behind us, thick reed, indicating that we are at the limits of the Páramos de Vilacoto and Casablanca (km 3.1), a privately-owned park area.

In winter the Páramos [moorland] is home to a significant roost of hen harriers and in summer it is relatively common to see the common reed bunting. We keep going for 1.1 km with the moorland to our left and the rice fields to our right, then turning left, as we are now at the Desguàs de la Sacapuntas drainage canal (km 4.2). We turn left and carry on along the dirt track with the Sacapuntas drainage canal on the right and the moorland on our left. After 500 m, we have rice fields on both sides again and 1 km further on we turn right (km 5.8) in search of the Encanyissada lagoon. We follow the dirt track for 600 m more until arriving at the Acequia del Inglés dike and the road of the same name that comes from Els Ullals de Baltasar springs (km 6.4).

Here, we cross the Inglés dike and the road and then carry on along a dirt track that starts in front of us from the right. We follow it for 900 m, passing the Mas de la Campana farmhouse just at the end, before arriving at the Acequia Grande dike (km 7.2). Here, we have to cross the dike by a green iron bridge, suitable for bicycles. Once we have crossed the ditch, we can choose whether to go to the Patrau lookout point situated 250 m away to our right. From this point we are also connected to Itinerary 1, “The Lagoon Route”. Our route, however, continues to the left. Once we have crossed the bridge, we turn to the left, and after 1 km then turn to the right to meet the Encanyissada bike lane after 400 m. From here, we are linked to Itinerary 6, Amposta-Ullals-Casa de Fusta.

We carry on along the bike lane towards the Casa de Fusta. After 2.7 km, we arrive at the Carreter lookout point (km 11.2). We carry on and after 1 km we arrive at the Casa de Fusta, the Park Information Centre and one of the Delta’s most emblematic buildings. It also hosts an exhibition on the Delta’s lagoons (km 12.2) from March to September. We then retrace our steps for a total journey length of 24.4 km. This route is comprised of rural footpaths (64%), bike lanes (28%) and roads (8%). Dirt (92%), tarmac (8%). From October to February. During the hunting season that runs from the beginning of October to the end of February, the Vilacoto area is closed, meaning that we have to complete the itinerary as follows: We complete the same initial part of the journey as from March to September, but when crossing the Acequia de Mar (km 1.1), we turn right and follow a dirt track that runs parallel to the dike for 1.8 km. When we meet a private property, we must join the road that connects La Ràpita with Poblenou del Delta (km 4). We join the road on the left and, very carefully, continue in the direction of Poblenou. After 850 m, we abandon the road and then turn left and join a tarmac path - El Camino del canal del Inglés [The Englishman’s Canal Path] (km 4.9). We follow the Inglés path (the same name as the canal that it runs parallel to) for 2.1 km, where we have to cross the bridge that goes across the dike. From here on, we follow the same route as in spring and summer, till the Mas de la Campana farmhouse and the iron bridge (km 7.8), the link with the Encanyissada bike lane (km 8.9), the Carreter lookout point (km 11.9) and the Casa de Fusta (km 12.9). From October to February, we retrace our steps for a total journey time of 25.8 km. This route is comprised of rural paths (40%), bike lanes (28%) and road (32%). Dirt (68%), tarmac (32%). 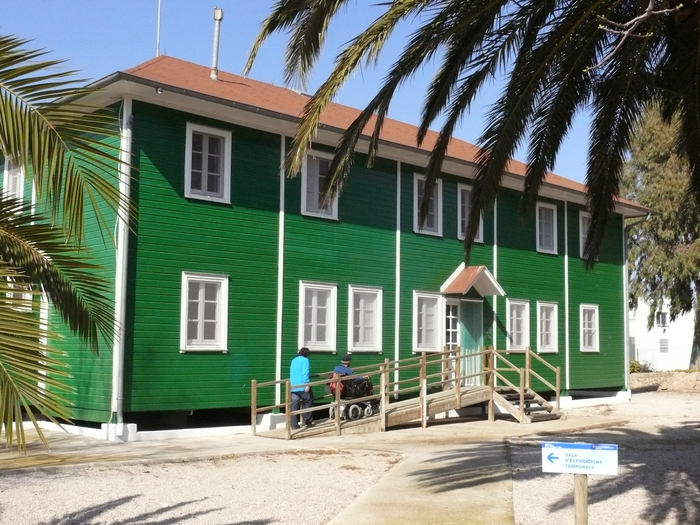 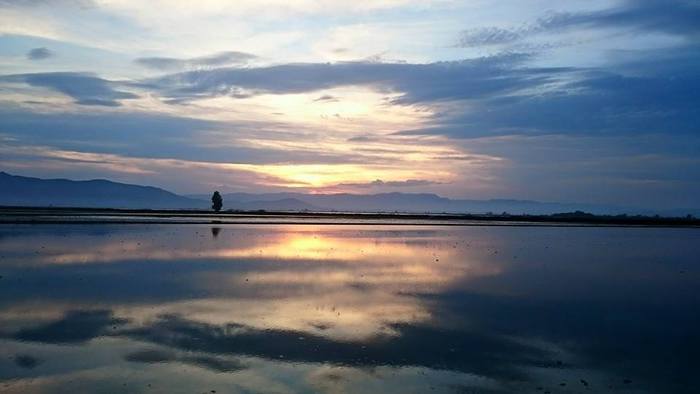 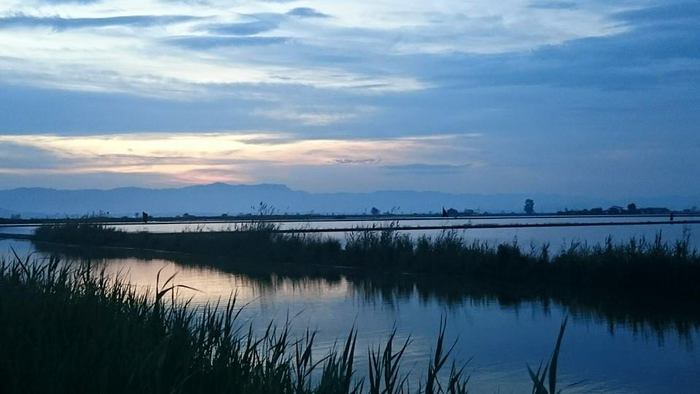